THE SHORT STORIES OF XAVIER ALLARD
I am Xavier, and I know many stories of many genres as I walk in the shadows, in the darkness, and everywhere else. From the darkest corner of your bedroom closet, to the brightest spot in the Sahara I am there, I have seen. I would like to tell you a story, a short story as it may be compared to others, but this one is special. Why you ask? Maybe the title would reveal more. Yes, the title. This one is called 2 killers and a girl. Lovely title isn't it? If this relates to you, it is most likely not a coincidence. No. It could be because you were the girl maybe, or perhaps a murderer? Who have YOU murdered? You won't tell me? Well I might as well carry on...

It is a nice, cloudless night in the eastern United States, along the coast, yes the wonderful coast of Florida, maybe 10 or so miles north of Miami. A young lady, around 15 sat in her liking room, home alone as she watched the latest horror movie, not that it scared her. She wasn't scared of much, if anything. Yes, that's what she thought. She thought she was so brave and tough, but that would all change wouldn't it?"

Yes, that tall old grandfather clock just alerted you it was midnight didn't it? Well, the horror marathon is still going strong so why go to bed? You don't, do you? Hmm I thought so. You lie on that couch, your soft eyes watching the large television, the monster popping out and killing the girl, yes, that was a horrific death wasn't it?

You jump up, eyes wide as you hold your hand over your chest. Yes that sound startled you, it sounded like something inside the house didn't it? Yes, something inside the old house you haven't lived in long. Your slightly frightened now Laura, aren't you? Yes....,but you ignore that loud bang and continue to watch the movie.... It continues, the deaths, the blood, the odor.... Yes. You suddenly can smell the ghastly smell of a rotting corpse, and that greatly puzzles you doesn't it Laura? Yes. It does. You hear a freak, just a small creak but it's enough to set you off and you duck your knees to your chest, not that it would either.

You hear heavy footsteps behind you, heavy footsteps that suddenly sound. You can hear the heavy breathing if something and you slowly turn your head don't you Laura? Yes you do, and what do you see? Yes. You saw it, the pale faced monster you had only earlier watched on you television. His white mask glowed eerily in the dark, his hands clutched around a bloody knife, fresh blood too as he approaches you. His eyes, coming from the mask are empty and dark. You stand, yes you stand and back away when he throws his knife at you. You see it coming, and you duck but it scratched your arm, slicing the skin and allowing your warm crimson blood to begin to come out. You yelp and run, yes run to the kitchen. You flung open the drawer and grab a knife, then another. You feel something cold behind you and you turn, slowly, the knife clutched in your young hands. You let out a yelp as you see who it is, another pale faced being. It's a girl, a young girl with black burnt out eyelids and dark hair, a knife in her lace gloved hands. You raise your knife but you can feel her steel cut into your wrist, severing the artery and scratching your bone. You scream in pain and back up, falling onto the ground. You stare up don't you Laura? Stare up into the face of the girl as she snatches up the knife you dropped. Your doomed now aren't you? Yes? Yes. But the male masked killer appears, and tries to stab you, but the girl defends you and delivers the final blow, stabbing the guy in the chest, the neck, and right through the eyes the blade going into his skull. She yanks it out and comes back to you doesn't she? Yes. She's right next to you now, leaning over you isn't she? She begins to cut your hand, slicing it off and holding it up for you to see. Your shocked, you can't scream, you can't move Laura now can you? Now she moves the knife to your neck and whispers a few words, then slices your neck, deep. The blade goes through the artery, and through your windpipe, lodging in the spine. Your dead now aren't you? But you can hear her final words....

Dont go to sleep, it will the last thing you do

(Nuh-uh! I went to sleep last night but I woke up today! SHNOW DAY IN OKLAHOMA!) 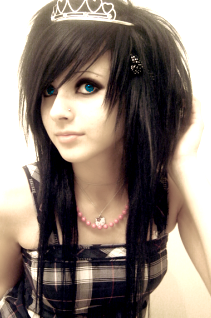 Ah. So your back I see? Enjoyed the last story hmm? Didn't scare you now, did it? Oh admit it already. It did, it scared you silly. Or rather, dead. Yes, I know a person who read that story and was uh, hmm lets just say they don't walk the earth anymore. Oh! Your new? Yes you. Well, I am Xavier. My last name? It's not important, however I do have a new story. Yes, it involves an old chap. Back in Indiana I think. It's called....lyrics of murder!. Lovely title hmm? Well I might as well get started....

It's a foggy day in Gary, a town in Indiana. A boy walks down a street, his hand inside his coat, holding something. What is he holding? That will come later. He's listening to a song, yes a special song. His name is Steve by the way, and as he walks squarely down the lit street, he pulls the brim of his black fedora way down low to cover his eyes. There isn't a sound is there? No sound at all a he walks down the seat, all he can hear is the sound of his feet.

You pause Steve don't you? Yes, you pause and look at the sky, wondering what was going to happen now that you escaped that asylum. A lucky break too wasn't it? Yes, more luck than skill. You watch as the lights, the lights above you that we're protecting you by darkness go out, yes you watch them and begin to fear what was coming. You reach into your jacket, yes you do and pull out a machine gun. Mhmm, you have a machine gun, yet you don't remember picking it up. You check, and you see it's ready to go, safety off already.

Are you ready for this Steve? Ready for the murders your going to commit, yes your certain now that you need to kill, like you did before the asylum. Your practically hanging on the edge of your seat with the anticipation to kill. Suddenly, out of the blue bullets rip, beating in front of you to the sound of a beat.

You return fire, turning in a circle as you let loose the bullets from your machine gun, unloading until your sure of something. Something hit the dust, hard. You smirk to yourself don't you Steve? Yes you do.

"Another one bites the dust" Is what you say isn't it? Yes. That's exactly what you say as you gun down two more people. Yes, another's ones gone but your shots have alerted the police haven't they? Mhmm. Your being chased Steve, and they are gonna get you to, what are you gonna do now? The police took everything you had didn't they? They kicked you out of your home and into an asylum. Are you satisfied now that your out? No. But how long can you stand here? You run now don't you, but you can hear the police cars behind you, yes they are chasing after you, and gaining. A cop leans out the window doesn't he? Yes and he fires, his bullet ripping into the crisp night air. You think your safe don't you? But your wrong Steve, the area is a trap. There is no way out.

A bullet slams into your shoulder doesn't it? Yes, a lead bullet enters your shoulder, causing you to stumble and fall from the pain. Your trapped Steve, like a rat. But your desperate to try anything aren't you Steve? Yes, I'm certain you are. You stand shakily, and yell hey at the cops, as you watch them approach. You laugh don't you Steve? Yes you laugh and fire at them, firing until your out of ammo. Now what are you gonna do? Sure, another one but the dust, but your doomed Steve. Doomed. They hail you away don't they? But you will be back, yes you will. But this time, you want it all. And then....

Another one bites the dust