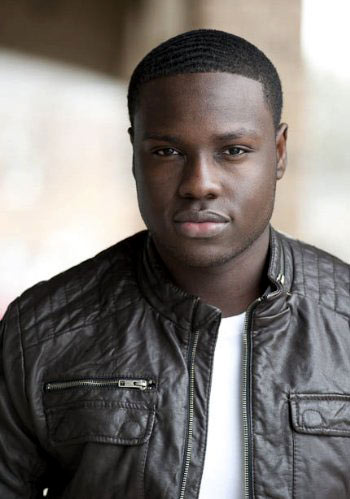 Real name:Alexander Dia'ed
Alias: (The name they use on the job and any nicknames they may have gained)Mnyama
Alignment: (hero, villain, depends on the situation)Superhero
Age:17
Gender:Male
Race:African American, super human
Place of origin: Alexander was born in Botswana, Africa, but moved to the United States of America with his family when he turned three years old. He currently lives in North Carolina.
Physical Description:Alexander stands 6'2 feet tall and weighs 175 pounds, which is mostly muscle mass. His skin complexion is a mocha color while his eyes are a brown color. Alex is yew scares and burns on his skin. He has a semi-muscular structure. He has cut short, black hair and a mole on his left shoulder blade.
Costume Description: Alex wears black leather, sleeveless vest along with dark orange fingerless gloves. His pants matches his vest and wears cloth around his waist that splits into two pieces, one in the front and one in the back. The two pieces of cloth are designed in African symbols and writings. He wears black combat boots. Last, but not least he wears a black mask that covers his eyes and all the way down to the bridge of his nose. He possesses three throwing knifes that are attached to his belt loops.
History: Alexander's parents were born in Africa, but moved to the Americas three years later. When his mother had became pregnant with him they decided to go back to Africa to have the baby. Nine months passed and Martha, Alex's mom, had him. His father, Darwin, wanted to stay in Botswana for another three years. Martha agreed and they stayed. The month after Alex turned three, him, his mother, and father packed up there things and went back to North America. They moved to North Carolina and settle down there.
Alex's power first started to show when he turned thirteen. He was on his way home when a toddler had run out in the street to retrieve a ball. Unfortunately a car was driving toward the girl and her ball. Alex unselfconsciously took on the speed of a pronghorn antelope and ran to snatch the little girl before the car could hit her. When he got to the other side of the road with the girl, he was astonished at what he had just done. He stumbled back from the girl and ran the rest of the way home. when he got there, he decided not to tell anyone about his newly discovered abilities and kept them a secret. Two years passed and his powers started to become more and more active. He soon decided to use his gifts for good and help out around the town he lived in. Al, like most heroes, had to separate lifes and made sure they never blended together.
Personality: Alexander is a quiet and timid person, but once he warms up to a person, he can be a really nice person to hang around. He sometimes will have loud outburst and may say certain things that are not true. Al also has a slight fear of heights and likes to be on solid ground. He tends to flinch whenever someone tries to hit him or thinks that someone is about to hit him. This is the cause of light bullying he endured in middle school.
Powers:Alexander has the ability to tap into the metamorphic field and take on the traits of all the animals that have ever lived on planet, Earth. He is able to take on at least three traits and or abilities at once, however he can only mimic the abilities of the animals that are currently on the continent his is on. He will hopefully find a device that will allow him to take on the traits on any animal, on any continent. He is immune to both animal and plant poisons and venom. When he does use his power, a ghostly image of the animal he is mimicking will form around him; the hologram will fade away soon after.
RP Example: (Only needed on the first form.) Alexander stood in his room as he packed some of his clothes. He had decided to leave his parents and head somewhere else."Let's see..." He said to himself and made sure he packed everything he was suppose to. "Hm..my inhaler.." he looked in his bedside table. "Ah." He quickly put it in his pant's pocket. He slung his bag over his left shoulder and walked out of his room. After writing a letter to his parents about him leaving. He closed and locked the front door behind him as he left. Alex walked along the roadside, wondering what lies ahead.
Password:Nova Real name:Constance Gabriella Diaz
Alias: (The name they use on the job and any nicknames they may have gained)Aztecia
Alignment: (hero, villain, depends on the situation)Hero
Age:24
Gender:Female
Race:Spanish, Superhuman
Place of origin:Barcelona, Spain
Physical Description:
Costume Description:
History:
Personality:Constance is strong woman and has a protective spirit. She has a soft spot for mothers and will go out of her way to make sure they are safe. She is a brute when it comes to battle and wont let nothing stand in her way.
Powers:Aztecia has the ability to throw and left objects that weigh 2,000 pounds, however, she can only catch an object that is 1,500 pounds and that is traveling 75 miles per hour. She has the power of flight and can 85 miles per hour. She can only do this for five minutes without tiring out. Aztecia can control fire and heat sources. He can create heat seeking fireballs and form bright flashes of light to confuse and temporarily blind the attacker. She has a very high tolerance for heat and is resisted to smoke inhalation.
RP Example: (Only needed on the first form.)N/A
_________________
Mnyama|17|Animal Mimicry|Hero|Single